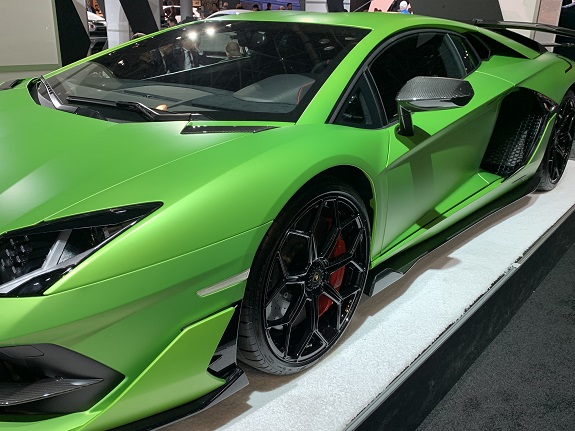 If you didn’t know yet, The New York International Auto Show (NYIAS) opened to the public on last Friday, April 19 and will continue through Sunday, April 28 at the Jacob Javits Center in NYC. If you have never been to the NYIAS you will find cars and trucks on display from auto makers from around the world. Everything from Ford, Chevy, Dodge to Lamborghini, Rolls Royce and Bugatti and everything in between.

I was lucky enough to get a sneak peak with others in media last Wednesday and Thursday. It was nice to get around the showroom floor with ease and avoid the crowds. In my opinion, it seems to have lost the pop that it had in the past and in speaking to others in the industry the echoed the same. That being said,  there is still lots to see at this years auto show.  I did take the opportunity to look at some of the 7 seat SUVs that I have been eying to purchase later in the year. Ford and Chevy are on the top of my list at the moment. I will be doing more research in the coming months before making my decision. Get out there and check it out for yourself. Let us know your thoughts.

A few things you may not know about the NYIAS:

How do I get there?:

All the major mass-transit possibilities will get you to the center, including the subway, Long Island Rail Road, buses, and of course taxis, Uber, and Lyft. The show is about a 12-minute walk from Penn Station. You could also drive yourself, if you enjoy the exorbitantly priced parking near the Javits Center and driving in New York City. A more affordable way to get to the show might be the NY Waterway Ferry from Port Imperial Weehawken; the Ferry is offering a combo discount which costs just $33 for adults and $18 for children and includes admissions to the show.

General admission to the NYIAS will run $17 for adults and $7 for children under 12. For groups of 20 adults or 10 children, you get a $2 discount per ticket. To get your tickets to the show check out the auto show’s website or you can purchase tickets in-person at the Javits Center.