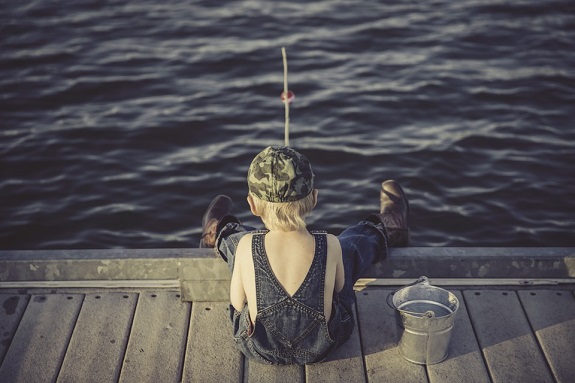 Fishing, on the face of it, is a quiet and straightforward activity. You roll up to an open body of water, whack out your fishing rod and box of tackle, and get to work. The hours can roll by, and not much happens. But then, suddenly, there’s a tug on the line, and you know that opportunity is upon you. You’re about to make a catch.

The question of why fishing is so appealing to guys has long been a question of interest, no least to keen anglers themselves. Why is it that men love fishing so much? What is it about such a seemingly innocuous activity that makes it so appealing?

Whenever a biologist wants to understand human behavior, the first place they look is evolution. According to their worldview, evolutionary necessity drives behavior. It’s why humans are the way that they are. If guys love to fish, there’s some reason deep in the past that compels them to do it.

You can probably see where this argument is going. Evolution, you could argue, baked a desire to fish into men. It became a crucial part of their role in the community to collect food so that everyone else could eat. Fishing provided lots of calories and a delicious meal that everyone could enjoy together. The men who most liked fishing were those who were most likely to survive. Perhaps that’s why we do it.

The evolutionary argument, however, seems a little deterministic. There are all kinds of hobbies, for example, which have nothing to do with our evolutionary past. Some men, for instance, love playing the piano, but there were no pianos or Mozart in the jungle. There were just people, their brains, and their desire for survival.

The Thrill Of The Chase

Perhaps the answer, then, is more psychological. Maybe the reason that guys love fishing is because of the thrill of the chase. It’s the idea that you rock up to a lake or river with your gear knowing that you’re in for a big dose of satisfaction when that first fish bites. It’s the anticipation of catching a fish a feeling like you’ve achieved something.

This theory is probably a little closer to the truth. Angling is a competitive sport, and there’s a deep sense of excitement when a fish does eventually bite. You never quite know whether it’s going to be a whopper or not.

But there’s a problem here too. While there is the thrill of the chase, very few people who do fishing will ever talk about it in that way. Ripping fish out of the water actually seems to have very little to do with it. There are other ways for guys to get their kicks than sitting for hours waiting for a tug on the line.

The Love Of The Kit

Another theory is that it’s not about the activity itself, but rather the kit. In this way, it’s a bit like classic cars. The avid classic car enthusiast isn’t so much concerned with driving their vehicles as they are in appreciating the physical objects themselves. Thus when a keen fisher searches for the best beginner fishing kits, what they care about is the kit, not the fishing itself.

It seems like a strange comparison to make, but it does make sense. Fishing kits are surprisingly complicated things and a topic in which you can lose yourself. Just setting up the kit and researching all of the elements can be a fun activity in itself.

Fishing isn’t new. People have been doing it since there were people, and even before if you take the archeological evidence seriously. There are, therefore, a large cohort of guys who learned about fishing from their fathers and grandfathers. Many men have strong memories of sitting for hours in nature with their male role models, chatting and waiting for fish to pop their heads up above the water.

Nostalgia is a powerful thing. It’s relaxing. It helps to transport you to an idealized time and place. You can escape nitty-gritty reality and explore a fantasy world that feels real.

Perhaps, therefore, this is what fishing is doing. It’s taking guys to places in their past. It’s a sort of meditative experience that reconnects you with your identity. Fishing itself might not have anything to do with it. It’s just a chance to be reflective, be in nature, and feel the rawness of reality.