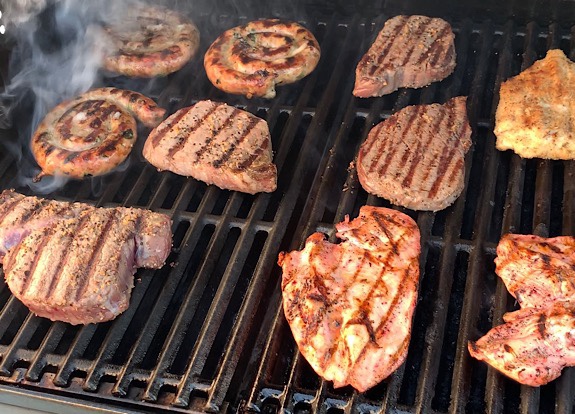 We are early into my favorite foodie time of year. BBQ season! There is nothing like a good BBQ whether it is hamburgers & hot dogs, steaks and sausage or chicken and just enjoying the backyard. There is almost anything that can go on a grill if you put some imagination into it. Grilling isn’t a chore for me, it is more like a past-time.

At first glance the Char-Broil Commercial four-burner TRU-Infrared grill may look like a traditional grill, but when you look under the hood you will notice it’s advanced infrared technology will provide you with beautifully cooked foods. I was a little nervous wondering if I was going to get a well cooked meats for the first time as I have never cooked on an infrared grill before. Needless to say everything was a hit!

Prior to receiving the Char-Broil, my two prior grills had 5 burners so I was worried I would have a smaller cooking surface. With a large family this was a legit concern. Surprisingly it has about the same grilling surface if not a little more than my last five burner grill. You can fit up to a whopping 30 average-sized hamburgers on the cooking surface and 14 on the warming rack. That makes this perfect for my large family.

Overall, I found this grill easy to use and put together, with the occasional instance where certain things didn’t line up exactly right but everything worked out fine. Some steps may require 2 people.

The meat drippings fall down and vaporize on the sear plates, which is great for flavoring your food, but it also could mean a cloud of smoke in your face when you lift the lid so stand back when opening.

NOTE: The burners are protected under warranty for ten years, so if there are any defects, you can get them replaced or repaired for free during that time. The warranties for the grates, cook box and lid last for three years, while other parts are only covered for a year each.

Disclosure: I received the Char-Broil Commercial TRU-Infrared 4-Burner Gas Grill in exchange for my honest review. The opinions expressed in my review are my own. No other compensation was given.