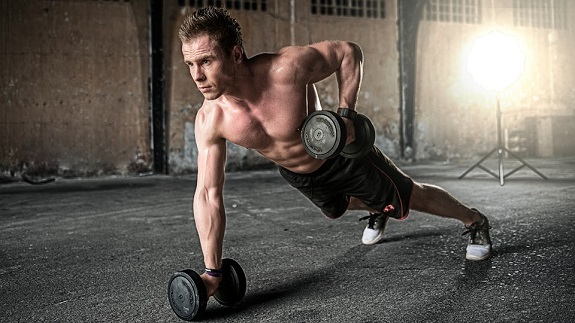 Winter, for most people, tends to be a time of hibernation and stuffing their face with all sorts of festive treats.   Yet, with  New Year on the horizon, it can pay to get a head start on the fitness frenzy that will soon be hitting your streets.

Indeed, it’s a strange phenomenon,  as in the next few weeks, coming up to Christmas, the gyms will be empty and most people will find themselves curled up at home as the cold weather creeps in… yet, on January 2nd, almost like clockwork, the streets will be full of joggers and the gyms jam packed with people in a drive to get fit for the new year.

However, the hardest part of getting in shape is taking the first few steps, as these are not only the hardest in terms of the mental and emotional power required to step into action – but they are also the most painful, as your body has to adjust, to a new conditioning routine that can take its toll in the first few weeks.

Therefore, it makes sense to get over the hump, prior to the New Year, so that when it comes to the New Year you can hit the ground running and get off to a fantastic start.  In that vein, this article looks at three of the most important steps you can take to getting in shape this water.

Your body is made up of a very high percentage of water, yet most people are chronically dehydrated which puts a lot of strain on the bodies vital organs.  It can also affect how foggy your brain is, as the brain itself consists of a large portion of water, so when it is dehydrated, it works a lot slower than it is capable of.

When it comes to working out, it’s important you keep hydrated throughout your workout, yet what’s even more important is that you are hydrated prior to working out — as so often, you’ll find people rarely drinking anything during the day, then they get to the gym and that’s the only time they drink water, which they guzzle down due to dehydration.

The American College of Sports Medicine recommends drinking at least twenty ounces of water in the two hours prior to exercise – the trick being to to drink little and often throughout the day to ensure a general state of hydration.  In keeping yourself hydrated you’ll be less likely to suffer muscle cramps both during your workout and afterwards.

With regard to keeping hydrated throughout the day, it can be helpful to buy a water bottle that has lines indicating how much water you should have drank by a certain period of time – for instance, 10am, 12pm, and 2pm — to keep you on track.  Another option is to buy two 1 litre bottles of water each morning – and know that by 1pm you should have drank the first liter.

This way, you can stay on track throughout the day, and see it as a goal to drink all that water before you get home from work.

When it comes to exercise, eating and hydration the principle of “little and often” seems to be the best approach.  With regard to exercise, you don’t want to do one huge workout and then leave it five days before training again – it’s better to do 4-5 less intense workouts than one huge one.

With winter now here, you might want to check out these good skiing exercises, though if you’re just getting started on your road back to getting in shape it can be useful to start off with more gentle forms of exercise such as swimming and yoga.

Whilst yoga is often positioned as something more suitable for women, many men benefit from yoga, and if you look at the physique of people that practice yoga it’s akin to the shape of a gymnast – which is a very desirable look.  The key benefit, however, is that you are working your muscles in a way that is beneficial rather than detrimental to their growth.

As a guy, it can feel much more rewarding to lift heavy weights or engage in explosive interval training such as that offered by metafit and crossfit – yet, if you’re just starting out doing activities such as swimming that are very supportive of your body’s joint structure can be a much safer and effective way to start out.

When it comes to your diet, the majority of people know what is and what is not good for them.  For instance, you know that eating a carrot is going to be better than eating a carrot cake, indeed, you probably understand the cause and effect of reaching for the carrot cake over the carrot on a consistent basis – yet, we often find ourselves being more tempted by the cake.

The reason for this is that many people are emotional eaters, meaning they eat to either reward themselves or comfort themselves, rather than viewing food as a fuel source.

This is the most imperative aspect of positive change when it comes to dieting, as whilst you can get swept up in the next diet fad, at the very heart of dieting is the simple formula of eating less bad stuff and eating more good stuff — yet, the reason we find it so hard to do this is because we have addictions to certain types of food such as sugar and caffeine.

Therefore, dieting is much more mental than most people realise.  It’s therefore a good idea to consider looking into tools such as hypnotherapy and meditation around overcoming food addictions and comfort eating – because this here, is the key to unlock the door that leads to a healthier diet.

Anything else will involve so much willpower and battle against yourself, that it will be an uphill struggle where you likely find yourself taking one-step forward and two-steps back.  The key advice, if you’re looking to get in shape this winter, when it comes to dieting, is therefore to deal with the emotional aspects of eating.