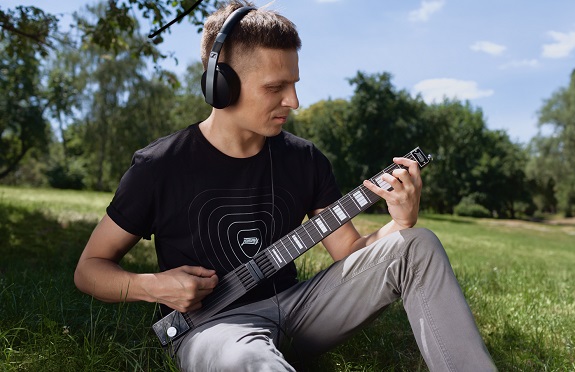 The Jammy digital travel guitar by RnD64 is claimed to have the best playability-to-portability ratio: Its 15 standard-sized frets are suitable to play 70% of the rock hit-songs, while it also fits into most of the backpacks and complies with the airlines’ carry-on regulations. It’s all about the neck that can be easily detached making the whole thing only 17” long.

Last year, the Jammy successfully closed the crowdfunding campaign on Indiegogo. The proof-of-concept period validated the unique digital components’ choice and the innovative onboard sound generation principle of the instrument. Ready-for-manufacturing version presented at CE Week, however, sports the new mechanical design.

The thorough testing by users of different skill level has shown that the prototype required improvement in terms of playability. So, leaving the electronics mainly intact, the company changed the mechanics, implementing the detachable neck instead of the sliding one. Jammy’s backers on Indiegogo have overwhelmingly supported the change.

Apart from the increased playability, the new design has also given the Jammy a cool look. Bearing traits of the great guitars of the past in its appearance, the Jammy remains a cutting-edge technology gadget, entitling the creators to somewhat boldly brand it the ‘Future legendary guitar.’

Importantly, the Jammy is the most autonomous in its class. Its battery is now extended for longer operating time. It has two direct audio outputs — a 1/8″ and a 1/4″ jacks — allowing to stick in the regular earphones or plug the guitar straight into an amp without the use of any mediating device and thus minimizing the latency.

The sound is not only generated but also processed on board — different guitar effects can be applied and switched among without the need of using the mobile application. The Jammy mobile app, though, widens the guitar’s capacities. With it, the user can play to the beat of a metronome, switch the type of the guitar, change the tuning, and configure the FX chains to achieve the desired sound.

The Jammy mobile app has an auto-recording feature that captures everything you play and allows you to retrieve your sessions, so not a single note is lost. It also offers a bunch of backing tracks in different genres to jam along to, facilitating the user’s improvisation prowess by providing a range of notes to easily combine into licks and solos over the underlying harmony of the backing track’s chords.

“It’s all about the harmony after all,” says RnD64 CEO Dima Shemet, “Bringing harmony into lives of those who need a really playable guitar wherever they go but can’t stand the hassle of carrying around a bulky full-scale six-stringer has been our primary goal when we set the Jammy project in motion. Now, we have finally found the harmony between the portability and playability that has also given Jammy the look and feel of the future legendary guitar.”

The company actively prepares for the mass production and plans on shipping the first batch of guitars to Indiegogo backers in August. Jammy will be launched to the general market later in the autumn at the estimated price of $349.

The redesigned Jammy guitar will be presented to the public for the first time at CE Week 2018, booth S18.