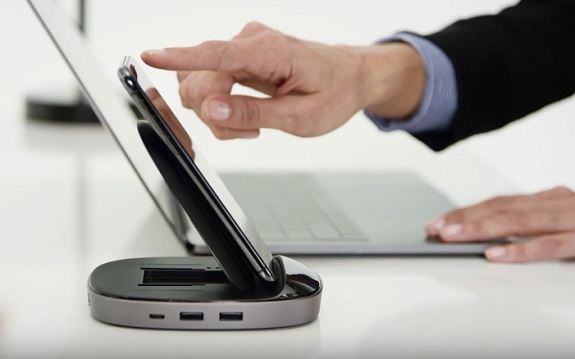 HYPER by Sanho Corporation (CES 2018 South Hall Booth 31850) – makers of the HYPER line of Apple and mobile accessories – announces its latest Kickstarter campaign for HyperDrive which will launch on January 15 (8am PST/11am EST) and which will be showcased at HYPER CES 2018 booth.

Building upon last year’s HyperDrive USB-C Hub for MacBook Pro which is the most successful crowdfunded MacBook and USB-C accessory having raised over $3.1 million, the latest HyperDrive combines the award winning USB-C hub with the most fully featured and fastest 7.5W Qi wireless charger for the iPhone.

HYPER is offering the HyperDrive as a reward to Kickstarter backers who pledge $69 or more in a bid to raise $100,000 via Kickstarter to fund the HyperDrive product. Funding starts on January 15, 2018 (8am PST/11am EST) and ends on February 19, 2018. Upon successful funding, HYPER aims to ship the HyperDrive in March, 2018. HYPER currently holds the record for the most crowdfunded MacBook and USB-C accessory, raising over $3.1 million for the HyperDrive USB-C Hub for MacBook Pro. HYPER has previously successfully launched and shipped 10 other crowdfunding projects which has raised over $5 million dollars in total.

Celebrating our 13th year anniversary in 2018, HYPER by Sanho Corporation is a young, energetic team based in Silicon Valley, California. We specialize in delivering cutting edge IT & mobile accessories with a focus on Apple, portable power, data storage & connectivity products. Our award winning products include: