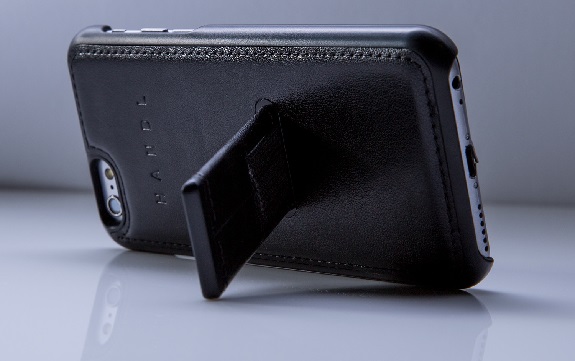 The entertainment world knows Allen Hirsch because Ellen DeGeneres collects his art. New Yorkers know him because he developed La Esquina, the underground SoHo restaurant that all the millennials flock to. The art world knows Hirsch because his inaugural portrait of Bill Clinton hung in the National Portrait Gallery in Washington DC and his paintings have appeared many times on the covers of Time magazine, in New York magazine and the New York Times.

Today, the tech world is going to know Hirsch because he is introducing his latest project, HandL, an interface for the smartphone that changes the relationship between your hand and your phone. “I refuse to call my invention a phone case,” said Hirsch. “It’s so much more than that. It’s the intersection point between your mind, feelings, body, and the rest of the world. You look at your cell phone at least 150 times a day. You shouldn’t be interacting with a cold, metal object, but rather a fluid interface that facilitates your natural rhythms of expression.”

Hirsch meticulously studied the way our hands project our feelings via his art work. He believes you should be able to hold your smartphone the same way an artist holds a paintbrush, allowing the most flexible organic connection between hand and phone. Just like the way the hand controls the relationship between the paintbrush and the canvas, the same holds true for the smartphone.  Hirsch spent part of the last 20 years painting in jungle huts in Venezuela, creating works that resemble Dutch 17th century imagery. That’s where he invented new techniques such as string painting and explored brain lateralization in creating art and on the face. It is these interests in natural living, science and the way we touch things that lead to the development of HandL.

The line of HandL smartphone interfaces feature patented elastic and brace system that allows you to hold your device with just one or two fingers. It feels like the phone is floating in your hand. You can now use your smartphone more securely, in any situation, without the tight grip that causes hand and wrist tension. HandL interfaces free one hand for multitasking. It also gives you more flexibility to take longer range selfies and smoother panning videos. The HandL grip eliminates any fears of dropping your smartphone.  The HandL interface also converts into a hands-free portrait/landscape stand.

The new, elegant HandL models come in leather black, white and brown for the iPhone 6 Plus and retail for 49.99.  A special brown HandL Pillow model for extra finger comfort is being released for $49.99

The first generation black HandL 6/6s Plus, iPhone 6/6s smooth and patent leather, and Galaxy Note 4 (fits the Note 3 as well) cases are all on sale and available for $24.99 on the company website – www.handliberation.com.