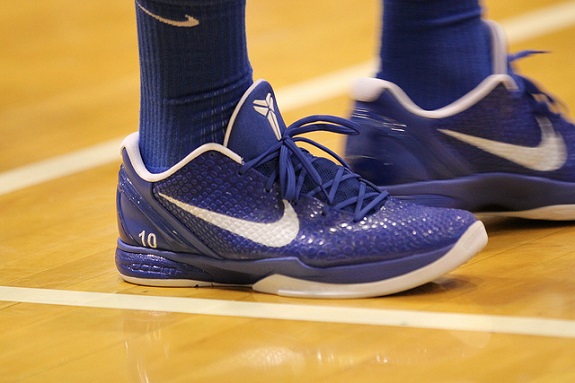 With the holiday season well and truly here, it’s time to decide what to put on your wish list once again. Perhaps you’re into your sports and love receiving new gear at Christmas. If so, then check out this list of everything that you should be asking for over the festive period!

Basketball Shoes – If you’re a big baller and love the NBA then you’re going to need the perfect shoes to wear next time you’re on the court. Kobe Bryant has just released a new pair alongside Nike, so they may be worth sticking on your list! There’s a ton of basketball shoes out there suited for all types of players. Whether you prefer Nike, Adidas, Reebok or Under Armour, sports stores everywhere will have you covered! Make sure to note down your size on your Christmas list, else people won’t know which ones to get you. It might be worth heading down to your local sports store and trying a pair on, just to be sure that they feel and look perfect. Comfort matters in basketball!

Soccer Jersey – The European soccer season always hots up after the holiday season. The Champions League knockout rounds come around, and the title races in Europe’s top five leagues really start to gather pace! Be sure to stick the jersey for your favorite European soccer team on your Christmas wish list. Maybe you’re a fan of Messi and co. and would like a Barcelona top to make you too feel like one of the Catalan giants. However, you may be more into Ronaldo. If so, be sure to pick up a strip in the famous white of Los Blancos. Whichever team you opt for, you can rest assured that most sporting outlets will let you personalize your jersey with your own name and number. How cool would it be to have your surname emblazoned across the back of a Bayern Munich strip? Perhaps you’d prefer a more retro strip. If so, then Adidas have recently started manufacturing all of Manchester United’s sports gear. They’ve come up with some incredibly retro designs that are a great alternative to the 2015/16 jersey. They really illustrate how soccer gear has evolved massively.

Barclays Premier League Ball – Everybody who loves soccer totally digs the Premier League. The best league in the world has a totally awesome official match ball – something you must stick on your Christmas list! The ball features a 12-panel designed to help you strike the ball cleaner and more accurately. So, that you can replicate your favorite BPL heroes scoring their craziest goals in the park or on the soccer field. If your hero is John Terry or Alexis Sanchez then why not ask for the ball that these legends use every day in training for Christmas? It’ll get you outside and keeping fit and active, too! Be sure to pick up the winter edition of the ball. It’s bright orange design provides maximum visibility, so that you can play until the sun sets fully! Nice one.

NFL Game Pass – It’s not all that long until SuperBowl 50 – but it’s not too late to ask for an NFL Game Pass. This incredible subscription bags you access to every preseason, regular season and playoff game. Plus the SuperBowl – live in HD! You can watch on multiple devices, including your PC, laptop, smartphone or tablet and rewind and replay key plays. Once the 2015/16 season is over you can then make use of the access to an archive of high-quality replays of NFL games all the way since 2009. That means you can relive your favorite moments from loads of previous seasons! You can also download games to watch offline when your internet is out – so you never have to miss a second. There’s even a really neat ‘Condensed Games’, which lets you catch up on all the action in a game within thirty minutes, without ad breaks! Awesome.

EA Sports’ FIFA 16 – If you’ve got an Xbox One or PS4, then be sure to ask for the best soccer game in the world this Christmas. It’s easily as good as the NBA 2K or Madden NFL franchises. The game features some awesome game modes including ‘FIFA Ultimate Team’, or ‘FUT’ as it’s known by its fans. In this game mode, you can open virtual packs of cards and collect and trade the best players for your team! There’re some incredible rare cards known as ‘in forms’ as well as special ‘record-breaker’ cards, too. Shortly some of the world’s best players from the ‘Team of the Year’ are to be released into the game, too! Packing Ibrahimovic or Neymar is incredibly satisfying! If you don’t want to spend too much on the game then maybe consider playing ‘Career Mode’. In this mode you play through season after season with your selected club. You make transfers along the way, trying to always improve your squad. This year’s game features a new player training mode – so you can grow young stars into legends – it’s really enjoyable!

Baseball Cap – Everybody loves a bit of baseball. If you, like the next man, love America’s greatest game then why not show your support for one of MLB’s teams with a cool baseball cap? This is definitely a must for your Christmas list! If you’ve always loved the Yankees then why not get one in white blue and red and replicate the legend that is Derek Jeter? Caps come in all different styles now; you can get snapbacks, flat panels – even beanies for the winter! They’re great for showing support at your local ballpark or just keeping the sun’s rays out of your eyes. For many, a baseball cap is a big fashion statement, too. So why not get asking for one of these versatile and cool gifts for this holiday season?

Golf Clubs – If you’re a keen golfer, but wish you had the gear to go more often, then ask for it this Christmas! A new set of clubs is a perfect holiday gift that your old man would love to get you, for sure. The best brands to ask for are Callaway, TaylorMade and Nike! If you fancy being like up-and-coming American golf star Jordan Spieth, then get down to the driving range and get practicing. Once your new clubs arrive at Christmas, you’ll be dying to hit the green. The best thing about going out and playing golf is that it’s often a very relaxing all day experience. Sometimes it can be more enjoyable to play a sport with a lower intensity than most others. Even if you’ve never tried golf before, a set of beginner’s clubs will make a perfect Christmas gift for you.

Fitness Band – If you’re a bit of a fitness freak and love going running then these are almost an essential in the modern era. Ask for a Jawbone or Fitbit this Christmas and you’ll never have felt fitter by the time February rolls around. Sports bands are really stylish now too, and smarter than ever before. They sit perfectly on your wrist and look great alongside a watch or bracelet. They’re also incredibly lightweight and comfortable – so much so, that you barely even notice them! If you opt for a Jawbone, then take note. They work excellently with the incredible partnership app called Up. The Verge awarded it the best fitness app of 2015. You can’t argue with that! It features a smart coach that can really help you improve your lifestyle and make you far more healthy and active. All the data can also work seamlessly with other services like the popular MyFitnessPal. Give it a go, ask for one this Christmas!

Nike Hypervenom Phantom II Soccer Cleats – These cleats are some of the finest in the game, and you don’t even have to be a soccer player to make use of them. Lots of athletes take advantage of soccer cleats in a wide variety of sports. Even if you’re an ultimate Frisbee player, these could do wonders for you! Premier League star Wayne Rooney and high-flying Leicester City winger Riyad Mahrez both wear these right now. So why not stick them on your Christmas wish list? The boot keeps everything successful about the previous generation. It also adopts the “if it ain’t broke, don’t fix it” tagline. The boots are incredibly comfortable and provide you with unrivaled agility. This is ideal for all kinds of sports where you need to be speedy, agile and quick off the mark. Not to mention, they also look incredible too and come in an incredible bronze color.

Hopefully, these suggestions have got you scrambling for a pen and paper, ready to write down your Christmas wish list! The sportsman in you would be quite happy with any of this gear. Almost all of it encourages you to become fitter, more active and hopefully healthier, too. If you’re struggling for ideas for what to ask for this holiday season, then the answer should quite simply be any of the above! Happy holidays.