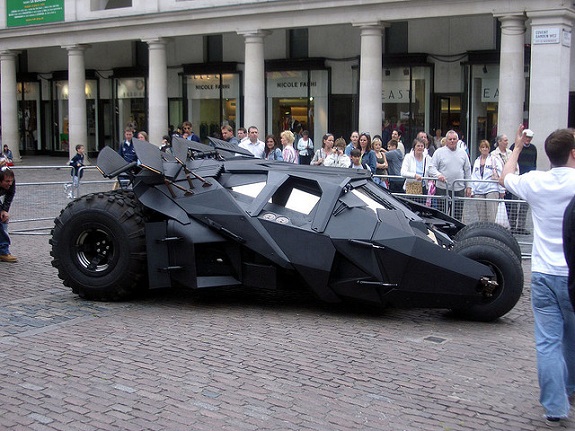 It’s nearly Christmas! That means it’s the perfect time to start thinking about things we’d love but can’t afford. There are some incredibly awesome gadgets on the market right now and coming soon to a store near you. It’s too bad they’re probably just out of your price range or off the charts where expenses are concerned. Never Mind though because by knowing what you could have it will encourage to work harder and make more. Right? Well probably not, but these gadgets and pieces of tech are fun to think about anyway.

Your Own Batmobile! – Could you own a batmobile? Well you certainly can because someone’s got one. Can you guess who? We suggest you think of the person you’d most hate to have one and you’ll probably get the right answer. Yes, Justin Bieber does have a batmobile but you might be wondering how much exactly he paid for the privilege. Rough estimates suggest the car cost more than one hundred thousand to have it custom made. So it’s not that expensive? You could always sell your house? Actually, we wouldn’t recommend it. While it might sound awesome Bieber’s batmobile isn’t that impressive. It’s nothing like the one you can sit in at Universal Studios. It’s essentially a black muscle car with tinted windows and a tiny bat sign on the front. We’re not that impressed…but we still want one. Let’s face it, celebrity assets are simply astounding. If they’re not buying a custom car they’re purchasing a private island!

Water Jetpack..thing – We’re still waiting on those hover boards Hollywood promised us for 2015. But while we wait we can always buy our very own jetpack. Well it’s sort of a jetpack, although one that only works over water. Still it’s rather impressive, and you will fly through the air. It certainly sounds incredibly cool and we’d love to try it out. There’s just one slight problem. They cost around seventy thousand. So, if we agree not to go on holiday for ten years and cut out Christmas present buying, we might get there. Failing that, you might want to purchase a dolphin speedboat. It’s around the same price and moves just like dolphin through the water at rocket speeds. In other words, if you get sea sick you probably want to avoid it.

Enter The Grid – We’ve moved on from being Batman and flying over the sea. Now we’re thinking about the possibility of entering the grid. Those who remember the original Tron are sure to have held the dream to ride a light cycle for years, maybe decades. For fans of the sequel, that dream is now a reality. You can buy a fully functional light cycle for around fifty-five thousand. It is completely road safe, and we would love to get our hands on one. Although, if you look at the videos on youtube you might think those promises of sixty miles per hour are slightly optimistic.

My Robot – Finally, we have to mention the fact that you can own your very own fighting mecha robot. It will cost you just under two million and will look fantastic in your front yard while you sit inside, working out the controls.

You might have thought we were making some of these up, but they’re all real and available to buy. The only problem? To afford them; you’d have to have a lot more money than sense.