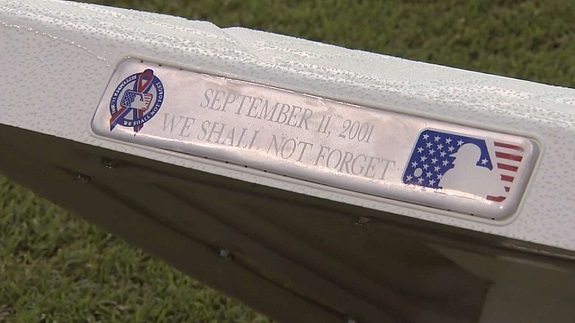 Major League Baseball today announced that there will be a league-wide commemoration of September 11, 2001 with tributes at all Major League games on Friday, September 11, 2015. This remembrance is part of Baseball’s ongoing effort to honor those whose lives were lost and affected on that tragic day.

On-field personnel, including players, coaches and umpires, will wear caps with a side patch of an American flag during games. All MLB proceeds from sales of these caps will be donated to the 9/11 Memorial and Museum, the Pentagon Memorial and the Flight 93 Memorial. Home clubs will mark the date with pre-game ceremonies, including a moment of silence, and the “We Shall Not Forget” MLB silhouetted batter ribbon will be displayed throughout ballparks. Additionally, special lineup cards and base jewels will be used for every game played.

The Toronto Blue Jays will wear customized caps recognizing both the United States and Canada for their game in New York against the Yankees on MLB Network Showcase at 7:00 p.m. ET. MLB Network will also feature coverage of the day’s events across MLB in its studio programming. MLB.com and MLBCommunity.org will provide complete coverage of the day’s ceremonies and perspectives through columns, news articles, multimedia and photos across the country.

That is a gesture and all but I still feel that both NY teams, the Mets and the Yankees should be allowed to wear first responder caps in place of the MLB sanctioned hats provided. I know I am not the only one who believes this (see MetsPolice) is just another way for Major League Baseball to make more money. New Yorkers know the most what this day means, they lived through it.Is it so difficult to let the players of both teams wear the caps for one day? Really! What are your thoughts? Let us know in the comments section below.