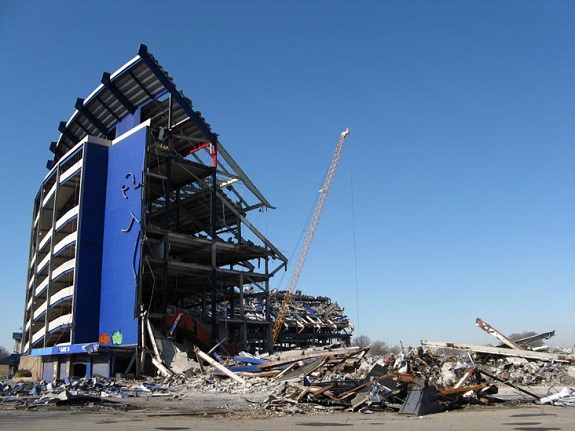 Shea Stadium was the home we grew up with and loved. Shea saw it all, from Mets baseball to Yankees baseball, Jets Football, soccer, The Pope, WWE wrestling, The Beatles, Led Zeppelin and so much more. It broke my heart as it did many other Mets fans hearts to see it go. It was the home baseball park of the New York Mets from 1964 to 2008.

In accordance with New York City law, Shea Stadium was dismantled, rather than imploded. The company with the rights to sell memorabilia was given two weeks after the final game to remove seats, signage and other potentially saleable/collectable items before demolition was to begin. The seats were the first ($869 per pair plus tax, a combination of ’86 and ’69), followed by other Shea memorabilia such as the foul poles, dugouts, stadium signage, and the giant letters that spell out “SHEA” at the front of the building.

After salvaging operations concluded, actual demolition of the ballpark began on October 14, 2008. On October 18, the scoreboard in right field was demolished, with the bleachers, batter’s eye and bullpens soon to follow.

By November 10, the field, dugouts and the rest of the field level seats had been demolished.

By mid-December, all of the Loge level seats and a good portion of the Mezzanine level seating were gone as well, leaving only the outer shell remaining.

Plaque commemorating the location of Shea Stadium’s home plate, now in Citi Field’s parking lot.Demolition work on the upper deck began by January 1, 2009. The next day, all that remained of sections 26-48 of the upper deck was the steel framework. By January 8, the steel framework for sections 36-48 of the upper deck had been completely removed; all that remained of the “Live & In Person” advertising banner at the top above Gate A was the extreme right portion with the Shea Stadium Final Season logo. As of January 15, the far left field portion of Shea was completely demolished and the left field upper deck (sections 25-47) was stripped to its steel framework. The remaining letters at the top of the ballpark behind home plate were taken down on January 21. Approximately two-thirds of the stadium’s outer superstructure was gone by January 24.

On January 31, Mets fans all over New York came to Shea for one final farewell to Shea Stadium. Fans took a tour of the site, told stories, and sang songs. The last remaining section of seats was demolished on February 18. Fans stood in awe as the remaining structure of Shea Stadium (one section of ramps) was torn down at 11:22 AM that morning.

Shea’s home plate, pitcher’s mound, and the bases are immortalized in Citi Field’s parking lot, and feature engravings of the neon baseball players that once graced the exterior of the stadium.

This was the last video ever of Shea Stadium from the inside during deconstruction. Taken January 2009.