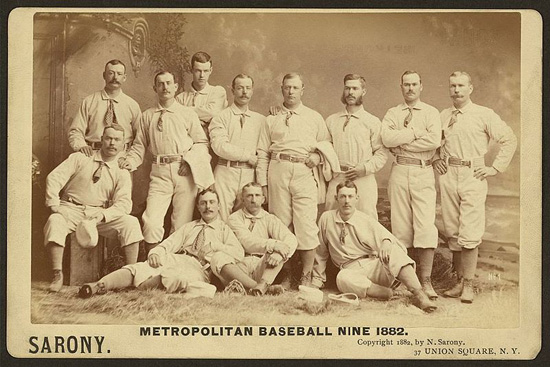 Yes you heard it right, The Metropolitan Club (the New York Metropolitans or the Mets) was a 19th-century professional baseball team that played in New York City from 1880 to 1887. Metropolitan Baseball Club of New York was the name originally chosen in 1960 for the current day New York Mets franchise, although the legal name has changed since then.

The Metropolitans were founded in 1880 as an independent professional team by business entrepreneur John B. Day and baseball manager Jim Mutrie. Initially the team played its games in Brooklyn and in Hoboken, New Jersey as the other New York area clubs did at the time. However, by September, Day had arranged the use of a polo field just north of Central Park bounded by 5th &amp; 6th Avenues and 110th &amp; 112th Streets in Manhattan that became known as the Polo Grounds, the first professional baseball park in Manhattan.

The National League had expelled the New York Mutuals following the 1876 season for failing to make their final road trip of the year and by 1881 had still not replaced them with another New York City franchise. The upstart American Association therefore saw a significant opportunity when it invited the Metropolitans to join the new league for its 1882 inaugural season. The Metropolitans declined, however, since joining would have meant forgoing lucrative home exhibition games against National League opponents.

Because of Metropolitans financial success at the Polo Grounds, and because each league knew that it needed a successful New York franchise to compete against the other, at the end of 1882 both leagues tendered franchise offers to the Mets. Unbeknownst to the leagues, though, the Mets accepted both invitations. To satisfy these commitments, owners Day and Mutrie acquired the Troy franchise that had been eliminated from the National League (along with Worcester) to make room for new franchises in New York City and Philadelphia. Day and Mutrie entered the Mets into the American Association and the newly created New York Gothams into the National League. The teams shared use of the Polo Grounds, which was reconfigured with two diamonds and two grandstands.

Initially, managed by Mutrie, the Metropolitans enjoyed greater success on the field than the Gothams. The Mets finished fourth in 1883, and won the 1884 American Association pennant. The Mets then faced Providence Grays of the National League in the 1884 World Series, but lost 3 games to none. Prominent Metropolitan players included Tim Keefe, Dave Orr, Chief Roseman, Jack Lynch, Candy Nelson and Dude Esterbrook.

Financially, though, the Gothams had more promise due to the National League’s stability, quality of play, and higher ticket prices. As early as 1884, the Mets were struggling to establish their own identity, and opened the season in a new ballpark, Metropolitan Park, located on the east side of Manhattan. The move proved unsatisfactory, and by mid-season they had quietly moved back to their original Polo Grounds home.

Prior to the 1885 season, Mutrie shifted over to manage the Gothams and brought along star pitcher Keefe and third baseman Esterbrook. The rechristened New York Giants finished second in the National League in 1885, while the Mets slumped to seventh place in the AA.

Prior to the 1886 season, Day and Mutrie sold the Mets to Erastus Wiman who moved the team to cricket grounds on Staten Island in hopes of promoting ferry trade across New York harbor. This business plan did not succeed, though, and the Mets ceased operation following the 1887 season. The team was bought by the Brooklyn Dodgers to gain territorial protection and the contracts of several of the Mets’ stars, including Dave Orr and Darby O’Brien. The current minor league Staten Island Yankees play in a stadium very near the cricket ground used by the Mets.

Here is the teams schedule from 1884.