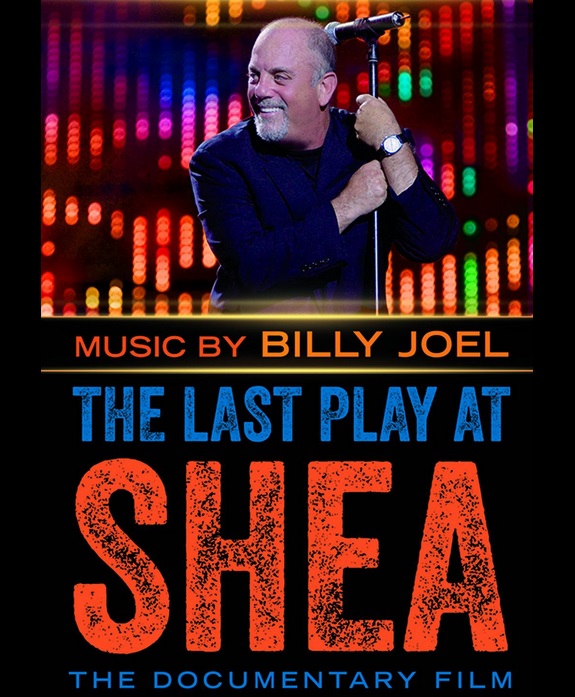 Two New York icons meet for one final time in THE LAST PLAY AT SHEA, which chronicles the intersecting histories of Queens’ landmark Shea Stadium and the legendary performer Billy Joel. The film focuses on the Piano Man’s two memorable concerts on July 16 and 18, 2008 – the final shows at the longtime home of the New York Mets. An engaging look at both the highs and lows of the Mets and the music career of Joel, THE LAST PLAY AT SHEA interweaves interviews with players and performers with footage from the goodbye concerts, in which Joel played many of his classic hits.

Serving as a tribute to what the Mets, Shea and Long Island native Joel have meant to the city, the film is above all a musical celebration that includes Sting, John Mayer, Roger Daltrey, Garth Brooks, Don Henley, Tony Bennett and others – who all share their stories of these electric summer nights. The film, narrated by New Yorker Alec Baldwin (TV’s 30 Rock), also includes the surprise appearance and performance by Paul McCartney – who with the Beatles gave the historic first rock concert at Shea more than 40 years earlier. The film will be released November 18, 2014, on Blu-ray and DVD and will be available on Video-On-Demand and iTunes.

About Virgil Films – Virgil Films & Entertainment was founded in 2003 by Joe Amodei to acquire, market, and distribute DVD, TV and Digital product in the theatrical feature film, documentaries, special interest and sports categories.  The company has built partnerships with OWN, Sundance Channel Home Entertainment, National Geographic Cinema Ventures, ESPN, MLB Productions, Morgan Spurlock’s Warrior Poets and other high-profile entertainment brands since their inception.  Releases from Virgil Films & Entertainment include the documentary Miss Representation; Todd Solondz’s Dark Horse, the critically acclaimed documentary Bridegroom, the timeless Forks Over Knives, and the Oscar® nominated documentary Restrepo. They have also released the compelling Gun Hill Road, The House I Live In, A Brony Tale and others. Follow them on twitter: @virgilfilms | www.VirgilFilmsEnt.com.

GIVEAWAY: A Blu-Ray copy of The Last Play At Shea. The Blu-Ray copy features four new bonus features that were not included in the DVD release back in 2010. Contest ends Friday, November 21st. Good luck. This giveaway is hosted by The Guy Corner NYC, and sponsored by Virgil Films. Once notified, winner will have 48 hours to respond or a new winner will be chosen. This giveaway is in no way associated with Facebook, Twitter, Instagram, Pinterest, or Google. Void where prohibited.

Enter here to win your own copy of The Last Play At Shea on Blu-Ray.