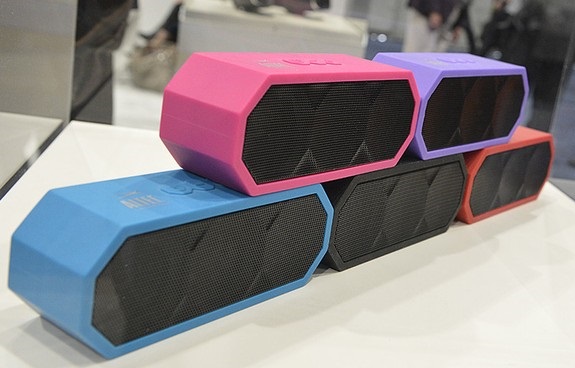 When you think of Altec Lansing, you think of a company that  traces its history back to 1927 when motion picture sound was first introduced with the release of The Jazz Singer. The company originally serviced theatre sound systems, then quickly expanded into manufacturing horn loudspeakers. From its storied beginning in film and professional audio, to its more recent line of computer speakers and iPhone docks, Altec has consistently put out innovative designs that have outperformed their size, and often, their competition. So when the company inevitably turned its focus to the world of portable Bluetooth devices with its new speaker, the Jacket (available for $130), there was reason to take notice.

When you open the lid of the Jacket’s thick cardboard box revealed an all-black polygon speaker with matching mesh faces at the front and back, each indented with a trio of driver-sized octagons. A soft polymer sheath lined the exterior, with three buttons on the top panel for power and volume adjustment and an Altec logo carved into the right panel. The Jacket gets its name from its available line of removable skins that pop over the speaker’s exterior, allowing it to morph its color pattern. Along with the black skin that is on the speaker you also get a red skin in the bottom tier of the box, along with a DC charging cable and a 3.5mm Aux input cable.

Pairing your device to the Bluetooth speaker is easy. Just press and hold the power button for a few seconds until the LED light begins to blink. After turning Bluetooth on your iPhone or music device, simply choose the “iMW455” from your device, and it is memorized into the unit, ready to go at any time. The Bluetooth speaker will store up to eight different sources in its memory. With Voice Confirmation, you’ll always know the status of your connection and with up to 8 hours of battery life and its hands free smart phone capability, you can easily put this portable speaker set to use doing just about anything!

The Altec Lansing Jacket is equipped with two 1.5 inch Neodymium and passive radiator drivers for sound that can fill most mid sized rooms. In testing the sound with a wide range of music it handled vocals pretty well, with bright sound and the treble was clear and well detailed though. Where it seemed to lack some was at the low end where the performance was less than what I had hoped but at the price rang better than most.

This Bluetooth speaker is so far the best sounding I have come across in this size/price range. Now being a smaller more lightweight speaker with a cheaper price tag, do not expect it to match up with the quality of the larger, heavier and pricier Bluetooth speakers on the market but for the money it is definitely worth it.

The Altec Lansing The Jacket can be found in most well known retailers, as well as Amazon.com. These speakers make a nice gift during the holiday season for not a high price tag!

What do you think? Would you use a device like this? Leave your comments down below.

Also check out my review on the iLuv Rollick.

Disclosure: I received the Altec Lansing The Jacket in exchange for my honest review. The opinions expressed in my review are my own. No other compensation was given.