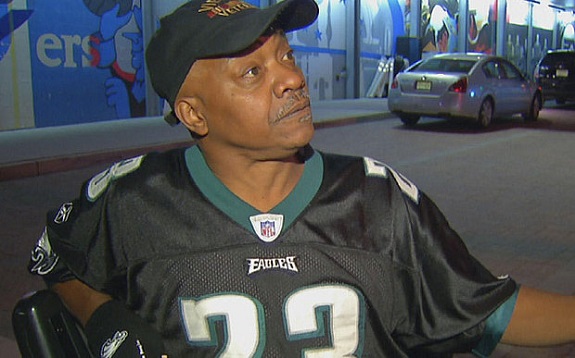 Philadelphia Police are looking for a woman who allegedly ran off with Sonny Forriest Jr.’s fake limb outside Lincoln Financial Field near the beginning of the Eagles game on Sunday night. Forriest, a well-known Philadelphia military veteran, often entertains Eagles fans as well as Phillies fans with his singing outside the stadium.

Forriest told police that he took off his leg because it was hurting him. It was on the back of his motorized wheelchair when a drunk woman in her 20’s wearing Eagles gear ran up to him, jumped in his lap and broke his microphone.

“She said, ‘I will pay you for (the microphone).’ I said, ‘That’s all right, baby, go ahead and have a good time,’ and then the next thing he knew, she was cutting through cars with his prosthetic leg in hand and she disappeared.”

SEPTA police found the prosthetic leg on a subway train about midnight Monday. Forriest says he was told there is surveillance video of the woman that has not been released. However, he says he doesn’t feel the suspect needs to be locked up, but someone should talk to her about her actions. No arrests have been made in the case.

This isn’t the first time Philadelphia sports fans have ended up in the news for odd behavior. In fact, city officials installed a courtroom in the old Eagles’ stadium in the late 1990s just to sentence unruly fans.

In April 2010, a Phillies fan intentionally vomited on a dad and his daughter. In 2000, a Philadelphia Flyers fan ended up in the hockey team’s penalty box with enforcer Tie Domi. And who could forget what could be the largest one-sided snowball fight in history, when Eagles fans pelted the Dallas Cowboys team in 1989?

What do you think of these types of acts? Let us know your opinion in the comments section below.