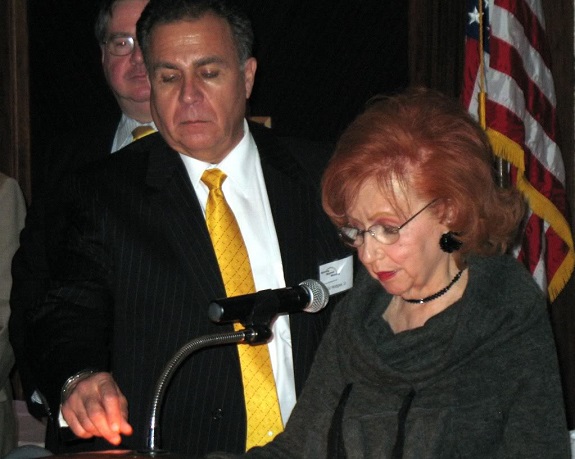 The woman who has earned the title First Lady of Brooklyn Baseball turns 88 late this month. The Brooklyn Cyclones honored Joan Hodges and her late husband Gil in grand style this year, handing out commemorative jerseys bearing Hodges’ name and famous number 14, and adding a “Mrs. #14” banner to their row of honored numbers at MCU park.

Probably the only thing that could make 2014 a happier year for Joan Hodges would be to see her fondest wish come true: the election of her late husband to the Baseball Hall of Fame in Cooperstown. Gil Hodges becomes eligible for election again when the Golden Era Committee meets December 8. The slate of candidates will be announced right after this years’ World Series.

A group of dedicated fans is working to help Joan Hodges’ dream come true. They’ve coalesced around an online petition, supported by a Facebook page. As of this writing, the petition has attracted more than 1,600 signers. They include a dozen past and present major league players, as well as numerous prominent baseball writers, announcers, bloggers and historians, plus hundreds of fans who remember the former Dodger first baseman and Mets manager with affection and respect.

The petition can be found at: http://www.ipetitions.com/petition/gil-hodges-belongs-in-the-baseball-hall-of-fame

Gil Hodges Jr. was at his mother’s side for the ceremonies at MCU Park, which also celebrated what would have been his father’s 90th birthday earlier in the year.

Hodges, an Indiana native, married Brooklyn native Joan Lombadi on December 26, 1948. They had four children together in their almost quarter-century of marriage, which ended with his sudden death on Easter Sunday, 1972. She’s kept his cause alive in all the decades since. In 2002, a reporter visiting her at her Brooklyn home—the same one on Bedford Avenue she shared with her husband and four children–observed her offering a prayer for her husband’s selection:

“Joan Hodges holds fast to her rite of passage into the night, starting with rosaries and ending with a whispered act of contrition. She begs forgiveness from a husband who died 30 years back, a coal miner’s son from the heartland who would have never allowed his bride to hold a big-city vigil over some self-important cause.

“‘It’s the last thing in the world he’d want me doing,” Joan said. “But I feel a real injustice has been done.”

A dozen years have passed and still Joan Hodges waits.

Fans devoted to the Hodges share her sense of injustice. They point out that he received more votes than any other candidate not eventually elected by the baseball writers, and he’s come as close as a single vote to being elected through the veterans committee. Some think he’s in the Hall already; some are indignant over his exclusion; but most are simply puzzled why this man, the dominant National League first baseman of the fifties, a key member of seven pennant winners and two world champions, a man who retired tenth on the all-time home run list, hasn’t received the call yet.

Some Hodges supporters try to take comfort in the fact that his exclusion from the Hall (like that of Pete Rose or Joe Jackson, though for very different reasons) actually has kept his name before the public in a way that wouldn’t happen if he already had his plaque. There was a raft of stories and discussion the last time he was on the ballot, in 2011. Many thought it would finally be his year. A candidate had to receive at least twelve votes from the sixteen member committee. Ron Santo was the single hopeful to be chosen that year; Hodges finished with nine votes.

Once more, Hodges boosters are hopeful that his time has finally come. Although whoever is chosen by the Golden Era Committee will be a member of the Hall’s class of 2015, the election and announcement will take place in December, so the campaigners have adopted a hashtag to help publicize their cause: #14in14.