For those of you who didn’t know, CE Week was in NYC last week and I had the opportunity to join in the festivities as well as take a look at some of the new technology you might possibly have on your holiday list this year if you are an electronics buff. Below is a run down of some of my favorite stops through the showroom floor last week. Unfortunately I didn’t get to stop at every booth but maybe next year.

A-Audio Headphones: If you haven’t heard of A-Audio Headphones, I suggest you start. This was one of my favorites of CEWeek. The company announced their Legacy Series headphones have been awarded a “CE Week 2014 Best in Show” award which should say something about the product for sure. A-Audio debut their EliteHD audio enhanced line of wired and wireless ANC Legacy over-the-ear headphones, Lyric wired on-the-ear headphones, and EliteHD earphones last week at CEWeek and I had the opportunity to check them out and get a sense of the sound quality they provide. The Legacy Over-Ear Headphone series comes in wired ($299.00 MSRP) and wireless ($379.00 MSRP) options, with both models available in Liquid Chrome and Phantom Black. These headphones were solid and had a really nice weight to them. Legacy wired models are available now, while the wireless models will roll out in August, 2014. In addition, the new Lyric on-the-ear series ($199.00 MSRP) will be available in mid-to-late July, whereas the EliteHD Earphones ($99.00 MSRP) are available now.

BodyGuardz: BodyGuardz showed ScreenGuardz HD Impact ($30 for iPhone, $40 for iPad), a crystal clear or anti-glare screen protector with the ability to absorb drop impacts by dispersing energy across the film. It also showed an anti-glare version of ScreenGuardz Pure ($40 for iPhone, $60 for iPad mini, $80 for iPad Air), tempered glass screen protectors with a new installation system.

GoBe: There are plenty of fit bands that calculate steps and calories burned but GoBe is the first and only that automatically measures calorie intake as well as your heart rate, yes you heard me, intake (through your skin). Simply wear it to see calories consumed and burned, activity, hydration, sleep, stress levels, and more, delivered effortlessly to your smartphone. Everything else is just a manual calorie tracker. Only GoBe precisely calculates calorie intake, burn, and metabolic rate during any activity, with no logging, tracking, or guesswork.

Olloclip: If you take any amount of photos or videos with your iPhone, an Olloclip is a must-have accessory, which provides macro, 10X Macro as well as 15X Macro wide-angle and fisheye lenses for your smartphone. The newest lenses from Olloclip are even more impressive – the Macro 4-in-1 lens provides super-close-up shots that really capture details of objects like never before, and the iPad lenses can attach to those tablets (it also works with the iPad mini) for the same kind of lens flexibility as the iPhone versions. As we continue to see photography and videography move to the smartphones of the world, the Olloclip is just as important for your phone as your protective case and earbuds.

Rocki: This was another favorite of mine. Rocki, a Netherlands based company provides anyone with older speaker systems that obviously were not built Wi-Fi compatible the capability to stream Wi-Fi content from your smartphone or tablet. I had the opportunity to speak with one of the co-founders, Dennis List.

Thinium: Tired of stuffing your phone’s wall charger in your pocket when traveling light? New startup Thinium looks to remedy that with their product, a small rectangular wall charger that’s about the size of a cracker. The company showed off several extra-portable chargers including Lighting and microUSB versions of the Thinium Charge that shipped at the end of Q1 2014 for $49 and $39, respectively.

UNU: After many years of false starts, 2013 saw wireless charging accessories really hit accessible price points, and we’re hoping that 2014 brings a unified standard or creates a dominant player. uNU is the latest company to bring its own option to the table with Aero Wireless Charging Battery Case and Mat for iPhone 5/5s ($100). The hard plastic battery case contains a 2000mAh cell, and there’s a micro-USB port so you can charge it directly. But the package also includes a thin mat with two metal plates, which uses the included micro-USB cable to juice up the case via contacts. 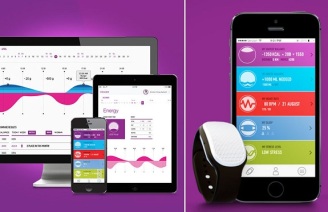 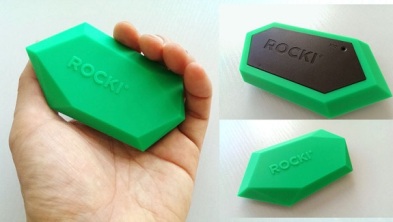 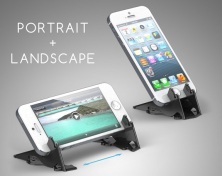 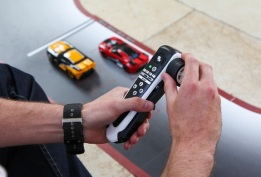 Hyper/Sanho: This accessory vendor showed off iStick, a USB flash drive with an integrated Lightning connector that was crowd funded via Kickstarter. It enables users to access separately-stored files via their own dedicated app, and is coming in August. An 8GB version will start at $79, doubling capacities step by step up to a 128GB/$249 model. File transfer from your iPhone was never so easy.

Loksak waterproof bags (and ShieldSak blockers): The LokSak bags are more than just a Ziploc-style baggie for your stuff – it’s made out of very tough, hard-to-break material with a hermetic seal. They were demonstrating this by dunking the bags with phones and tablets inside them into a fish aquarium. If you do lots of things near water (especially if you’re heading to the beach this summer), throw your stuff into one of these bags to be safer.

Pocket Tripod: There are lots of great iPhone stands that do perfectly well what they’ve been designed to do. But they’re either too bulky to be always carried along; or have pre-set angles that don’t adjust intuitively. The Pocket Tripod has been designed to be the most practical iPhone stand ever, by making it so portable, that you’ll always have it with you in your wallet; and by giving you complete tilt-adjustment freedom.

Real FX Racing: Another update on the old slot-car racing toy (remember those?), Real FX Racing is currently in a Kickstarter fundraising campaign for its offering. These radio-controlled cars include sensors and artificial intelligence to re-create the slot-racing experience, but without needing the actual slots. You can also create your own tracks (with the help of “1-Sec-Connect” track pieces), and race up to three other humans or against an automated pace car). The Kickstarter deadline is July 12, 2014, and is expected to cost about $255 when completed.

Samson: Samson’s Expedition Express Portable PA with Bluetooth is an all-in-one sound system that goes anywhere you want great sound. It’s battery powered, weighs 10 pounds and even Bluetooth enabled, so you can pair the Expedition Express with your smartphone, laptop or tablet and play your music without any need for cables. It’s perfect for parties, presentations, classrooms and the rest of a rapidly pairing world.

Skulpt muscle fitness tracker: A lot of health/fitness devices have been aimed at broad audiences, tracking things like number of steps taken or other simple measurements. The Skulpt device aims to take that a step further, by measuring things like muscle fitness. The device includes sensors on the back that measures fat percentage and muscle quality (MQ) for individual muscle groups, as well as your entire body. For athletes looking to create the perfect bicep or pec (or to check on how awesome your six-pack abs are progressing), this device could be right up your alley.

Ztylus: Although you might expect a company named Ztylus to make styluses, the company has actually debuted a pretty incredible new camera case and lens system for the iPhone. The Ztylus Original Camera Case for iPhone 5/5s ($40) uses aluminum and rugged plastic to make your iPhone look like a classic point-and-shoot camera, complete with a kickstand. What’s impressive is the Revolver Lens Attachment ($70), which goes onto the Case’s back, rotating with four different lenses — wide-angle, fisheye, macro, and a circular polarizer — each popping out and automatically fitting right in front of the iPhone’s integrated camera. Both are available together in a $100 “combo” bundle; Ztylus plans new attachments for the future.

What do you think? Have you used any of these products? Would you like any for the holidays?