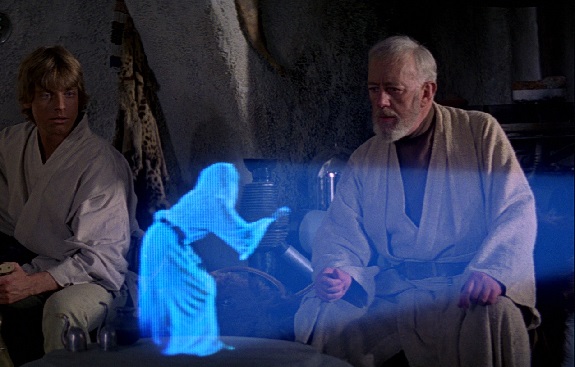 Once upon a time in a galaxy far, far away… This might sound like something out of the Star Wars saga when R2D2 displayed a hologram of Princess Leia to Obi Wan Kenobi & Luke Skywalker, but in fact it could be coming to a smartphone near you. A California-based startup company Ostendo Technologies has created the world’s first hologram projector chip that can emit crisp videos and glasses-free 3D images for smartphones and giant screens, capable of projecting video on a surface with a 48-inch diagonal.

The Tic-Tac-sized chip should be ready for manufacturing next year. The Ostendo Quantum Photonic Imager combines an image processor with a wafer containing radically miniaturized light-emitting diodes (LEDs).

“The key to the chip’s 3D capability is its resolution. Ostendo’s system puts out 5,000 dots per square inch. Apple’s Retina display, by contrast, has about 300 dots per inch,” explained Ramesh Raskar, an associate professor at the Massachusetts Institute of Technology (MIT) who is working on 3D displays for MIT’s Media Lab.

The system can control the color, brightness and angle of more than a million individual beams of light, according to ‘Discovery News’.

One chipset, small enough to fit into a smartphone, is capable of projecting video on a surface with a 48-inch diagonal but a patchwork of chips, laid together, can form far larger and more complex images.

“The first iteration of the chip will only project 2-D videos, but the next version, expected to follow soon after will feature holographic capability” Ostendo’s chief executive and founder, Hussein S El-Ghoroury told the Wall Street Journal.

What do you think of a 3d hologram smartphone? Would you get one? Let us know in the comments section below.